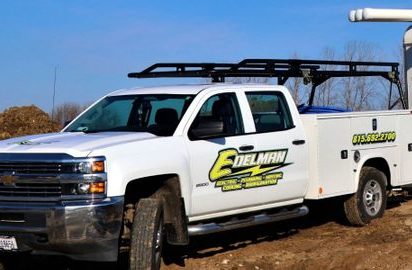 Kraig was raised on a family farm where honesty, integrity, and a positive work ethic were taught to him by his father. In his junior year of high school, Kraig participated in the school’s work program working half-days for a local plumbing, heating, cooling, and electric company. After high school, he went to work with his brother Kerwin at Edelman Electric and in 2003 purchased the company from him. At this point the company had only a few employees operating out of a shed on the family farm in rural Cropsey, IL. In 2010, Kraig purchased Kupferschmid Plumbing Heating and Cooling of Pontiac, IL, to work towards his dream of having a company that provides all three trades. Kupferschmid’s was a family business taking care of customers across Central, IL, since 1960! After operating both companies from separate locations for 4 years, the companies combined to form Edelman, Inc. from Fairbury, IL, in 2015. As business continued to grow, Edelman’s opened their second shop/training facility in Champaign, IL, to better serve their customers in Champaign and the surrounding areas.

Provide quality installation and service of HVAC, Plumbing, and Electrical systems to both Residential and Commercial markets by ensuring that the customer, employee, and company all win.

We treat each and every life we impact in a manner we would expect and desire to be treated.

Keep up with the latest tips and special deals –
subscribe to our monthly newsletter.